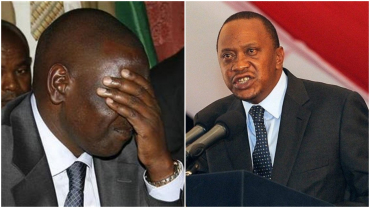 President Uhuru Kenyatta today 30th January met with M.t Kenya leaders at Sagana lounge. Kenyatta met with over 7 thousand delegates to discuss the region’s development agenda and politics. According to Kenyatta, he owes nothing to deputy president William Ruto.  He is focusing on his promises to the community. He also added he is not ready to engage in cheap insults as many people expected. Uhuru urged M.t Kenya people to support BBI since that’s what they can be proud of.

i know today some people are expecting me to come here, speak in anger or insult anyone. Too bad for them, i have no anger or insults. Mine is to have a conversation with you, to chart the way for this region and country… It is important to remind you of where we have come from, since 2007, you all know what happened, i don’t want to repeat that story. I remember how some of you seated here were so against our decisions to look for unity in 2007…You all remember how things were in 2017 and the repeat election. I feel so sad when I see people speak the way they speak today. There are some people here, who i can tell you what they went through in 2017 and i had to convince them, appeal to them not to revenge.Then you hear them call me dynasty just best i was born by Kenyatta. Who chooses where he wants to be born? Tell them to stop insulting me, they will know where votes come from next year.You hear them from top of the vehicles brag about what has been done: roads, water, education as if such work is done from those rallies. That work is done from state house, where you sent me. Tell them to stop milking with my ‘nappier grass’You remember how they claimed to have been left out of the handshake. Remember how in Bomas i said how they involved and even nominated members to the BBI team? The truth must be told” some of highlight that Uhuru Kenyatta Said

Subsribe To Be On The Know.